Explosion protection in the dust extraction system: What's this?

Dust collectors are a part of many industrial processes. Their main purpose is to either recover granular solid or powder from process streams or remove granular solid pollutants from exhaust gases before releasing them into the atmosphere. Dust collectors may be of single unit construction or a collection of devices used to separate particulate matter from the processed air.

Through centrifugal action, the cyclone separates dust particulates from the gas stream. During everyday operation, dust mixed with air enter the unit at an angle. The circular flow force pushes the dust particles onto the cyclone's wall, and then they fall down into the hopper below. To further separate the dust cyclone in this scheme is connected to the filtration unit via a duct. 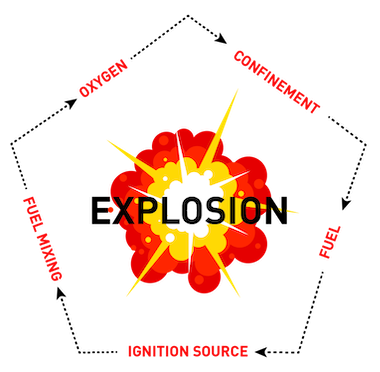 Material. It is simple, if the processed material is combustible, dust as a main or byproduct is an explosion risk that must be accounted for. During normal operation, handled material is dispersed into a confined space with centrifugal force in the cyclone. Have you ever heard about dust fire and explosion pentagon?

To make the dust go "KABOOM", five conditions must be present at the same time: fuel, dispersion, confinement, oxygen, and...? Correct, ignition source. From spontaneous combustion to mechanical spark, electrostatic discharge, or already burning particles in the duct system, all can cause an explosion in technology.

Situation 1 - Initiation in the cyclone

Let's say that our ignition source is an existing burning particle in the duct system going downstream to the cyclone. The first element of explosion protection is an explosion isolation flap valve B-Flap I (A). This mechanical device is under normal operation opened due to incoming airflow. In case of an explosion, the flap valve closes the duct so the explosion will not propagate further into the technology.

Pressure detector DetEx (G) mounted on the technology constantly monitors the process. In case of an impending explosion, it sends a signal to the CONEX control unit (D), which quickly evaluates the situation. The control unit sends an alert to the HRD container unit (B), and extinguishing begins. The explosion is suppressed, the cyclone is protected. HRD barrier (C) works as chemical isolation, thus the explosion will not further propagate. 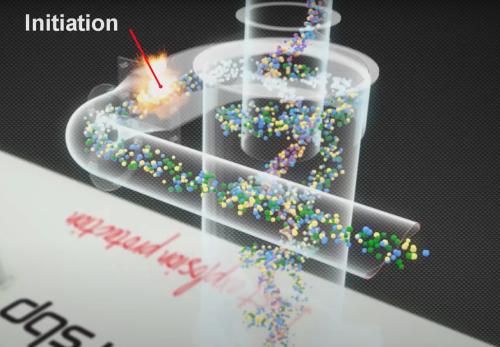 Situation 2 - Initiation in the filter

If the ignition source will appear in the filter, an explosion can propagate to connected technology and cause significant damages.

At RSBP, we think of every possible hazard. Our main goal is to protect your technology and keep your employees safe. 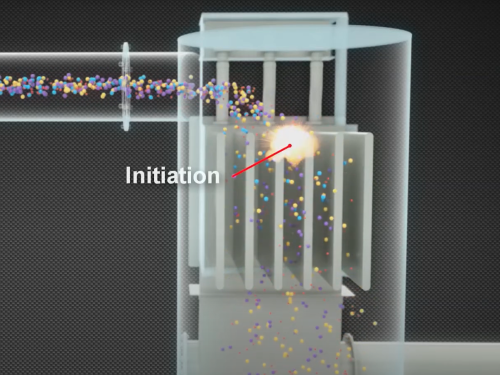 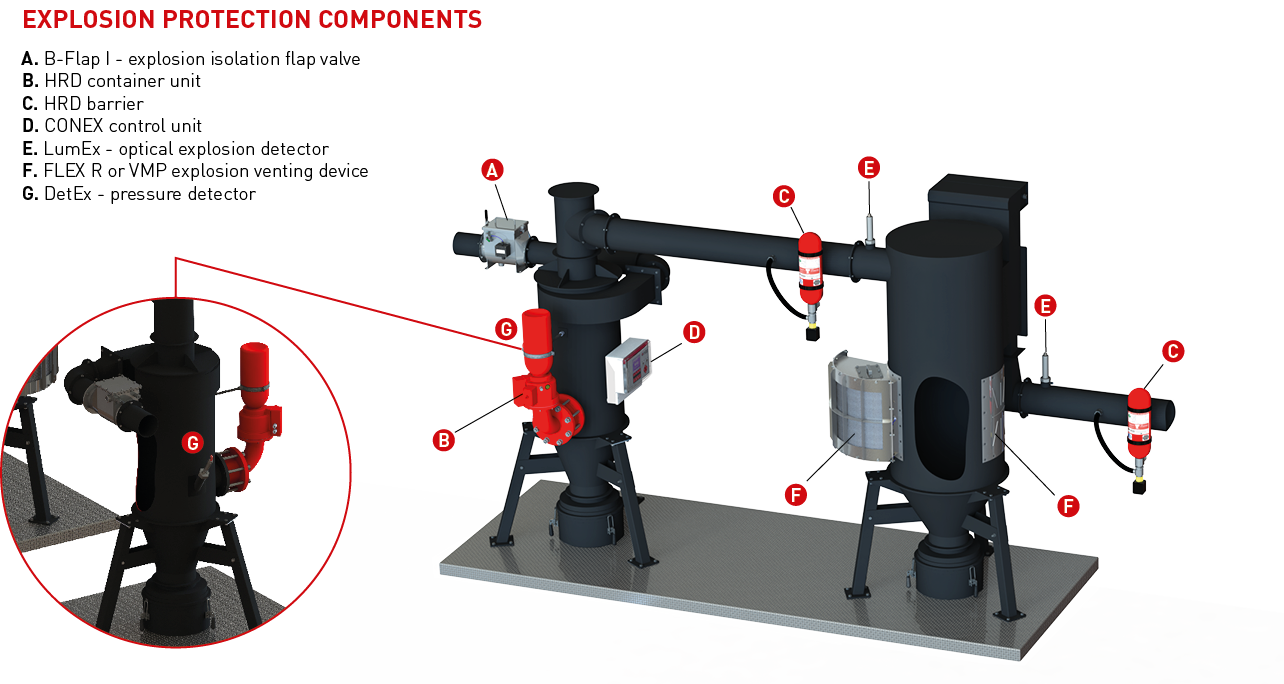 As shown in the video, we can see the chosen protection of a dust separator and filter connected to a fan. One of the most significant advantages of the HRD system is its variability. DetEx pressure detectors constantly monitor operating conditions and are able to detect an early explosion immediately. High Rate Discharge system is one of the most advanced extinguishing systems available; its quick response, high reliability, variability, and easy maintenance together create a perfect explosion protection solution for your facility.

The HRD barrier is an active system that prevents the propagation of an explosion further into technology. After activation, the HRD barrier releases the extinguishing agent extremely fast into the pipeline and stops the increase in pressure. The HRD barrier suitably complements the HRD explosion suppression system used to protect devices. The appropriate combination of these two systems efficiently prevents property damage and saves human lives.

The second variation offers a combination of explosion isolation, and explosion venting to provide the highest safety level possible. Explosion isolation flap valve B-Flap I is a mechanical device designed to prevent the propagation of flame and pressure between technologies in a time of an explosion. Flameless venting device FLEX C PRO installed on the top of a cyclone protects the whole unit from damage caused by pressure increase or blast wave. HRD barrier installed between technology stops further propagation of an explosion. This chemical isolation device is activated via pressure detector DetEx from the filter and via LumEx 1 from the cyclone.

DetEx explosion pressure detector continuously monitors operating conditions and is able to detect an early explosion immediately. In the event of an explosion, detector sends a signal to the CONEX control unit. In a case of a positive evaluation of a signal, CONEX sends the signal to HRD barriers; extinguishing begins - all that in units of milliseconds. VMP explosion venting device is efficient explosion protection. In the event of the explosion, VMP explosion venting device opens and pressure in the vessel is reduced below the pressure resistance of the protected vessel.

The first explosion protection element is an explosion isolation flap valve B-Flap I with an RPD mechanism (Reducer of Pressure Drop), which is under normal operation opened due to the airflow inside the pipe or due to an RPD mechanism that ensures its opening independently of the airflow. In case of an explosion, the flap valve closes the duct so the fire and blast wave will not propagate further into the technology.

FLEX C PRO, a flameless explosion venting device, protects the cyclone separator. FLEX is suitable in indoor areas as its safe zone does not require much space. Optical detectors LumEx 1 continuously monitor IR radiation abnormalities in the process. In case of an impending explosion, detectors send a signal to the CONEX control unit, which quickly evaluates the situation. The control unit sends an alert to the HRD barrier, and extinguishing begins. The explosion is suppressed, and technology is protected.

The filtration unit is protected on both sides. Flameless venting device FLEX R PRO protects the filter. Optical detectors monitor the situation in case of propagation of explosion. HRD barrier stops further propagation of an explosion to connected technology.